Theater Is A Medicine 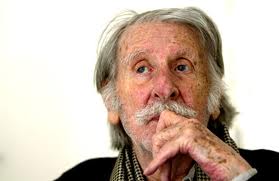 One of the greatest theater personalities of the 20th century was the Hungarian-German-Jewish George Tabori who died in 2007. His opinions may sound a bit old-fashioned today, but that just emphasizes their importance. This is my favorite Tabori quote: "Every society, so far, is based on a set of lies, commonly referred to as civilization. The function of art is to name these mendacities and evasions; to tell how it is, not the way it appears to be. Art is as therapeutic as medicine. Man, alone or in society, is by nature pathological; the cause of every sickness is some untruth. If we are telling the truth, we cannot help helping people - whether, as Brecht, we want to change the world, or, as Beckett, we do not. The particular glory and terror that makes the theater endure is the fact of its uniqueness; of all the art forms it is the only non-reproducible. It is tonight only, for the first and last time; it will survive the horrors of quantity." That's a consolation. My tv-set receives about 460 channels. Aren't today the horrors of quantity more terrifying than ever?