Not Poetic, But The Wright Idea 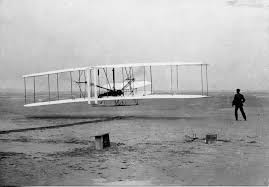 Although the brothers Orville and Wilbur Wright from Dayton/Ohio invented and built the precursor of today's powered airplanes, they were not the first to fly. Actually the construction of their aircraft's wings was based on Otto Lilienthal's flying machine. Lilienthal didn't see - or refused to accept - that a motor-driven propeller would solve the problem of human aviation. His thinking was very poetic. He admired the storks and believed that man would just need perfectly copied artificial wings to be able to fly. Individually, not jammed into a machine! The Wright brothers, affable and very sympathetic characters, gave full credit to Lilienthal's preliminary work.