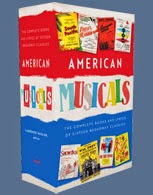 The Library Of America has just released a boxed set of two volumes featuring the complete books and lyrics of 16 Broadway classics, such as Show Boat, As Thousands Cheer, Oklahoma!, On the Town, South Pacific, My Fair Lady, Gypsy,  Fiddler on the Roof and Cabaret. Each of these classic musicals has evolved over time, receiving many important revivals and new productions. This Library of America boxed set offers readers unprecedented insight into this living history with a selection of hard-to-find or previously unpublished supplementary items, including lyrics of songs dropped out-of-town or added in later revivals. Lavishly illustrated with photographs and other images drawn from the original productions, the set also contains biographical sketches of the book writers and lyricists; cast lists and other information about the shows’ Broadway openings; and detailed accounts of the path each show took on the road to Broadway. As a special feature, the box includes 16 full-color postcards reproducing the original show posters.