Wisdom Of The Old 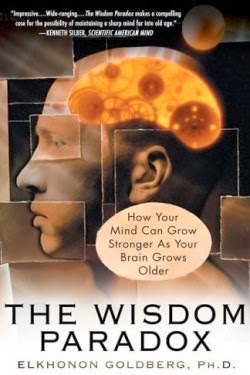 Getting older each year, I am naturally concerned about getting dumber. I gave up the idea of wise old people already in the late sixties. Experience told me that there are at least as many idiots among the elderly people as among the young ones. Actually research shows that cognitive functioning slows as people age. Now I get the consolation that speed isn’t everything. A recent study in Topics in Cognitive Science pointed out that older people have much more information in their brains than younger ones, so retrieving it naturally takes longer. And the quality of the information in the older brain is more nuanced. While younger people were faster in tests of cognitive performance, older people showed “greater sensitivity to fine-grained differences,” the study found. It stands to reason that the more information people have in their brains, the more they can detect familiar patterns. Elkhonon Goldberg, a neuroscientist in New York and author of “The Wisdom Paradox,” says that “cognitive templates” develop in the older brain based on pattern recognition, and that these can form the basis for wise behavior and decisions. I wish to believe it.