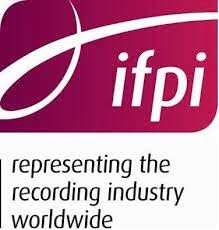 According to an annual sales report from the International Federation of the Phonographic Industry, wholesale revenue from recorded music around the world in 2013 fell by 3.9 percent compared with the year before, to $15 billion. Digital sales last year grew by 4.3 percent around the world, led by a 51 percent increase in revenue from subscription services. Income from Spotify, Deezer and Rhapsody, exceeded $1 billion for the first time last year. About 28 million people around the world pay for access to them, up from eight million just three years earlier. Yet this success was offset by declines in downloads and physical sales. Sales of physical formats like CDs, which still supply about 51 of the industry’s trade revenue, fell by 11.7 percent last year. And sales of downloads, a growth business for more than a decade, were off by 2.1 percent. Still, downloads represent 67 percent of the digital market.