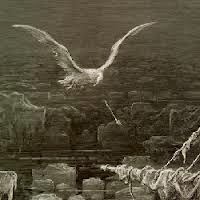 If I should ever be naive enough (and find an even more naive "serious" composer) to write another opera libretto, I will tackle Samuel Taylor Coleridge's The Rime of the Ancient Marine. Written 180 years ago Colridge's story has a contempory theme. It relates the saga of an ill-fated excursion in which the titular mariner makes a fatal misjudgment, shooting a wild albatross, whose spirit curses the crew. The wind dies down, stranding the ship, and the travelers expire of thirst. After confrontations with angry sailors, then dead sailors, then a ghost ship, the mariner washes up on shore, surviving to tell his tale. Obviously the albatross is a metaphor calling for musicalization, symbolizing guilt, suffering, and most of all the endangered nature. Most probably my version will never be written, because my first opera experience taught me that you must be crazy or masochistic to write for a non-commercial
stage without being officially commissioned.