A Documentary Of Doc Pomus 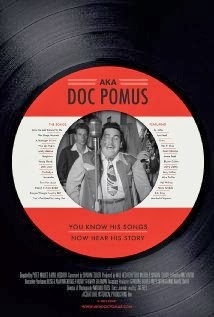 I just had a chance to watch the documentary Aka Doc Pomus about one of the 20th century's greatest songwriters. This wonderful biography of Doc Pomus does him full justice and also tells the the bitter-sweet tragedy of his life. Crippled by polio in his childhood, Pomus - born Jerome Solon Felder on June 27, 1925 in Brooklyn, New York - became interested in singing blues and writing songs after hearing a Big Joe Turner record as a kid. He played saxophone at the time, and after hearing Turner, blues music became his obsession. By the mid-'50s, after singing in a thousand blues clubs, Pomus came to a crossroads in his career: he was in his early 30s and if he wanted to get married and support a family, it was not going to be by singing the Blues - he decided to concentrate on songwriting. He took a young piano player, Mort Shuman, and molded him into his writing partner - a partnership that lasted many years and even more hit songs. I had the luck to get to know Mort in the 70's. We created and produced songs together, and he told me a lot about his time with Doc. Together they wrote the words and music to such hits as "Save The Last Dance For Me," (one of the 25 most popular songs ever recorded) "Little Sister," "Suspicion," "Can't Get Used to Losing You," "Surrender," "Viva Las Vegas" and hundreds more. After securing their own office in the Brill Building, the team continued to crank out hit after hit. Presley alone ended up recording more than 20 of their songs throughout his career, including items like "Mess of Blues." After the Pomus-Shuman partnership broke up, Pomus took a ten year hiatus from writing. He earned his living as a professional gambler, a weekly poker game run out of his West 72nd street apartment. Pomus' son Geoffrey was sitting next to his father one night, trying not to give away the cards in their hand and maybe learn a thing or two about the game, when the mob came in to get their cut... by way of two masked gunmen. This ended Pomus' gambling career and pushed him back to writing. Collaborating mostly with Dr. John, Pomus penned another string of gems for B.B. King, Mink DeVille and a host of others. In 1991 Pomus became the first white person to be awarded the Rhythm and Blues Foundation's (an organization he co-founded) Pioneer Award. Later that year, on March 14, he died of lung cancer at the age of sixty-four in New York. It makes me happy that William Hechter and Peter Miller have created a film that comes close to building the monument for Doc which he so well deserves.