The Hunchback Will Ring The Bells Again 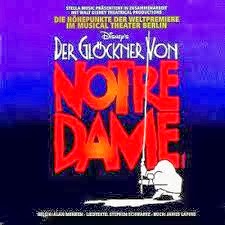 Disney will hold a developmental lab of a new stage adaptation of The Hunchback of Notre Dame, based on the 1996 animated film and classic Victor Hugo novel, which will take place in New York City in early 2014, according to an Equity casting notice. Featuring a score by composer Alan Menken (Beauty and the Beast, Newsies, "Pocahontas") and lyricist Stephen Schwartz (Pippin, Wicked, "Pocahontas"), the upcoming lab will feature a new book by The Cider House Rules playwright Peter Parnell, who also penned the book for the revised 2011 Broadway production of On a Clear Day You Can See Forever.
The Hunchback of Notre Dame made its original stage premiere in a German-language production that opened in Berlin in 1999 with a book by Tony and Pulitzer Prize winner James Lapine (Sunday in the Park with George, Into the Woods).
Book and Lyrics of that production were adapted for the German stage by Guess Who.
The new version, to be helmed by Scott Schwartz, will be a departure from the earlier stage adaptation. According to Disney, "This is a reinvention of the 1999 German production Der Glockner von Notre Dame, with an eye toward a possible regional theatre production. This new approach to the material incorporates a 'story theatre' style of dramatization in an intimate staging. The epic tale is set in late 15th century Paris. The Hunchback of Notre Dame investigates 'what makes a monster and what makes a man.'"