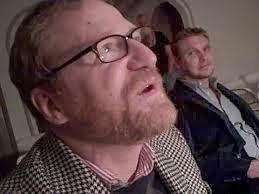 I assume there are a lot of songwriters and other musicians among the reader of this blog. Let me tell you about an article by Ben Sisaro  in yesterday's New York Times you'll find interesting.  It is about David Lowery, a member of the US-bands Camper Van Beethoven and Cracker. Lowery has come to represent the anger of musicians in the digital age. He has attacked Pandora for trying to lower royalty rates, accused Google of masterminding a broad anti-copyright campaign and compared people who doubt the effect of piracy on musicians to those who think President Obama is a Muslim. The issue has become hot as technology companies like Pandora and Google have replaced major record labels as the villains of choice for industry critics. Like most musicians, Mr. Lowery has seen his royalties fall with the overall drop in record sales. In 2002, his share of songwriting royalties from sales of the first Camper Van Beethoven album (released in 1985) was $1,147; last year it was about $440, a 62 percent decline. According to the Recording Industry Association of America, the value of record sales and streams fell about 44 percent in that time, to $7.1 billion last year, from $12.6 billion in 2002. The numbers of GEMA, SACEM and JASRAC look very similar. At the same time, the nature of royalties has changed, going from larger payments attached to CDs and downloads to fractions of a penny from streaming services. Pandora, for example, pays record labels and performers a combined 0.12 cent every time it streams a song; Spotify’s rates are not disclosed but are usually estimated at around half a cent per stream. YouTube refuses since years to give authors a fair royalty. Like most songwriters I share Lowery's anger. Fortunately I'm in a position to turn down every streaming request for my songs, because what I see in the end for even solid hits (if I see anything) is a royality payment that doesn't pay a Macdonald's lunch.