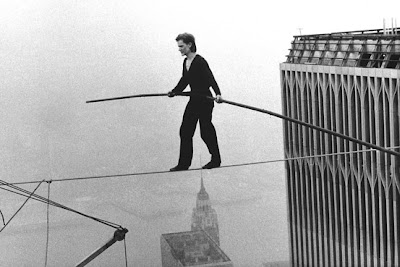 On a flight across the Atlantic I happened to watch Man On Wire, a BBC/Discovery documentary on Philippe Petit, the man who danced on a rope between the World Trade Center towers in 1974. Those towers were constructed for business purposes, and it is almost impossible to mention them without thinking of the horrible act of terrorism that destroyed them. For Philippe Petit they became a lifelong dream ever since that day he saw concept art for the massive structures in a magazine in a dentist's office in France. He began preparing his sky walk in France at the same time as the construction of the towers started in New York. As soon as the buildings were ready, he was ready, too. His walking across a wire spanning 140 feet across and 1,300 feet above ground was an act of bravery and an accomplishment of a lifetime. What fascinates me is that it was also a poetic metaphor - a dreamer overcoming all odds, defying law, common sense and gravity and dancing for 40 minutes high up in the sky between ecstasy and death.