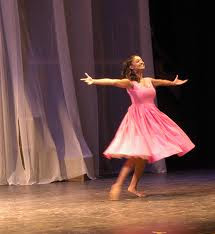 Maybe the best lesson about good lyric writing for a musical character I owe to Stephen Sondheim. One of his greatest lyrics keeps embarrassing him. As almost everyone knows by heart, Maria sings in "West Side Story": "I feel charming, oh, so charming, it's alarming how charming I feel...". Sondheim realized too late that those words and clever rhymes might not belong in the mouth of a simple teenage girl. Criticizing himself he judged that such a play with words draws attention to the lyric writer rather than the character. He rewrote the lyric to make it simpler and more in keeping with the way Maria expressed herself in the rest of the score, but Leonard Bernstein would have none of it. He liked it the way it was. As millions did who saw the show or the movie. Nevertheless still today Sondheim says: "I blush every time I hear the song."