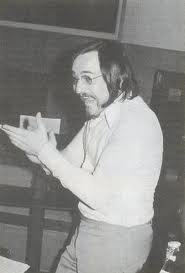 Forty years ago I spent my days and most of my nights at a Munich sound studio. I always used the same rhythm group of musicians. Some dark February morning the regular keyboarder did not show up. I called all good piano players in town, nobody was available. What should I do? The studio was booked, the musicians waited, I had a deadline. I was in a panic. A session agent suggested to send me the keyborder of a professional big band. Having no other choice, I reluctantly agreed. An hour later the guy arrived, a 28-year old Yogoslavian with a funny beard and long black hair. I gave him the score of the songs we would record, basically a tab sheet, and he joined the rhythm group for a first run-through. Listening to his playing in the corntrol booth I first nodded, then smiled. He was not only better than the replaced keyboarder, he was great. In no time he understood what I wanted and offered various ways to do it. I know musical talent when I hear it; this guy was a genius. I asked him on the spot if he would be willing to do more studio work. He did. The big band that had brought him to Munich had to look for another piano player. After the session we had the usual drink in the studio cafeteria. It was the beginning of a productive collaboration and a life-long friendship.