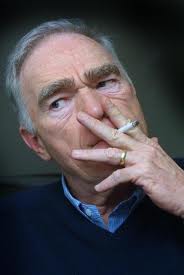 I have to confess that some years ago I attended Robert McKee's seminar in New York. Those of you who are interested in story structure probably have heard of him. McKee regards himself as the guru of gurus, to use a rhetoric form he is fond of. One of his ceterum censeos is that a writer must never be satisfied with the negation of the main character's goal, but that he must go to the extreme which he calls "the negation of the negation". You would not dare tell him that logic defines the negation of the negation as  an endorsement. Bob hates to be criticized. You may have seen what happened to Nicolas Cage, playing a troubled screenwriter, when he approached Robert McKee, played by Brian Cox in the movie "Adaptation". I advise everyone to buy McKee's book Story. It is much cheaper than the seminar, and you don't run the risk of being yelled at. This said, I hasten to add that I learned a lot from grumpy Bob and regard him as one of my mentors.