Quartet Of The Legends 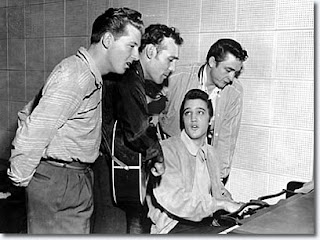 On December 4, 1956,
Elvis Presley dropped in on the little sound studio of Sam Phillips in Memphis to pay a social visit while Carl Perkins was in the studio cutting new tracks with Jerry Lee Lewis backing him on piano. The three started an impromptu jam session, and Phillips left the tape running. He later telephoned Johnny Cash and brought him in to join the others. These recordings, almost half of which were gospel songs, survived, and have been released on CD under the title Million Dollar Quartet. Tracks also include Elvis Presley's 'Don't Be Cruel' and 'Paralyzed', Chuck Berry's 'Brown Eyed Handsome Man', Pat Boone's 'Don't Forbid Me' and Presley doing an impersonation of Jackie Wilson (who was then with Billy Ward and the Dominoes) impersonating him on 'Don't Be Cruel'. A must-have for Rock 'n Roll buffs like you know who.
Posted by Unknown at 6:00 AM