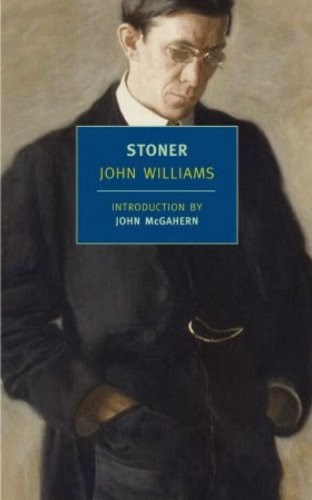 In today's New York Times Magazine Steve Almond is raving over a book that was written almost 50 years ago but whose time seems to have come right now. I confess that I had never heard of Stoner or its author, John Williams, before, but I also have never read such an enthusiastic review. According to Mr. Almond the novel tells the life of a hapless university professor of medieval history who struggles to understand who he is. "To read the book today is to recognize how shallow our conception of the heroic has become. Americans worship athletes and moguls and movie stars, those who possess the glittering gifts we equate with worth and happiness. The stories that flash across our screens tend to be paeans to reckless ambition. We might be willing to watch a drama about a meek high-school science teacher, but only if he degenerates into a homicidal meth tycoon. Heck, even our literary memoirs have to tell a “larger than life” story to find a wide audience… Consider our nightly parade of prime-time talent shows and ginned-up documentaries in which chefs and pawn brokers and bored housewives reinvent their private lives as theater. And this is what the rest of us are up to, as well. Consider the growth industries in our tech sector: social-media companies like Facebook and Twitter, look-at-me apps like Instagram and Snapchat, content-sharing websites like YouTube and Pinterest that serve as founts of personal marketing. If you want to be among those who count, and you don’t happen to be endowed with divine talents or a royal lineage, well then, make some noise. Put your wit — or your craft projects or your rants or your pranks — on public display. Otherwise, you wind up like poor Stoner: a footnote in the great human story. But aren’t nearly all of us footnotes in the end? Don’t the dreams we harbor eventually give way to the actuality of our lives? As a fictional hero, William Stoner will have to dwell in obscurity forever. But that, too, is our destiny. Our most profound acts of virtue and vice, of heroism and villainy, will be known by only those closest to us and forgotten soon enough. Even our deepest feelings will, for the most part, lay concealed within the vault of our hearts. Much of the reason we construct garish fantasies of fame is to distract ourselves from these painful truths. We confess so much to so many, as if by these disclosures we might escape the terror of confronting our hidden selves. What makes “Stoner” such a radical work of art is that it portrays this confrontation not as a tragedy, but the essential source of our redemption... He suffers no delusions about his place in the world. He recognizes that others find him absurd and that his intellectual contributions to his arcane field are at best minor. Over and over again, Stoner is forced to confront his own weakness, his limitations as a son and father and husband and scholar. And yet he refuses to turn away." Steve Almond, by the way, is not the only fan of Stoner. Tom Hanks said in an interview: "It’s simply a novel about a guy who goes to college and becomes a teacher. But it’s one of the most fascinating things that you’ve ever come across." Needless to say that I ordered the book today.