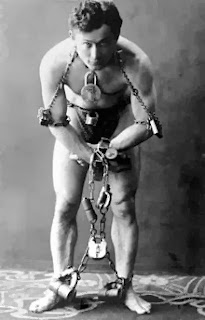 The Hungarian entertainer Erik Weisz who became Harry Houdini, the world's most famous magician, is on the project list of many musical makers. Although Houdini was hardly the best illusionist of all, his unique talent for gimmickry and self-marketing made him so famous that almost 90 years after his death his name is still a brand. So it comes as no surprise that a new Houdini musical is in the making and already on its way to Broadway. The original creative team included Tony Award nominee and three-time  and my favorite scriptwriter, Aaron Sorkin, who was supposed to write the book. The producers announced that Hugh Jackman would play the title role. Sorkin departed the project in early 2013. He'll be replaced by David Ives who "rewrote" my Dance of the Vampires for Broadway 12 years ago. Hugh Jackman left the project last Monday. The musical that has shifted the timeline for its Broadway arrival several times has now been scheduled for a 2015-16 opening. The historic Houdini freed himself from chains, shackles and ropes, dangling from skyscrapers and submerged in water. I wish my friend Stephen that his project will be as triumphant in the end as its protagonist who always managed to escape.