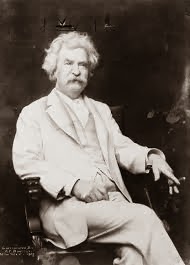 In the late 80s I met Tom Wolfe during his promotional tour for his book Bonfire of the Vanities.  I was surprised to see him intensely engaged in self-promotion. Like a pop star he created an image of himself. Only now I discovered that he was copying a famous role model. The first writer to brand himself was Samuel Langhorne Clemens. As early as 1873 he had tried to trademark "Mark Twain", and in  1908 formally established the Mark Twain Company to promote his work and image. Starting in 1909 the company, rather than Twain himself, retained copyright to new works. Mark Twain cigars and Mark Twain whiskey were already on the market. From early on, Twain made sure that his image remained distinctive and unforgettable -  from the shaggy mustache, shock of white hair and ever present cigar to the white serge suits, worn year-round, that were his signature outfit. Twain had become iconic. Those invited to his 70th birthday celebration in 1905 were given foot-high plaster busts of Twain to lug home.