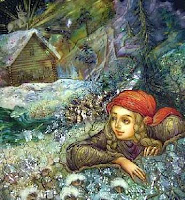 A long time ago, there was an old widowed hunter named Kokovanya. He was lonely so he adopted Daryonka, a poor little orphan girl. When he took Daryonka into his home with him, he also let her bring her scrawny kitten.

Kokovanya, Daryonka, and the kitten were not rich but they had a good life. While the old man hunted, Daryonka would clean the cottage and cook soup. Her cat kept her company. At night, Kokovanya told wonderful tales, but the girl’s favorite was the one about Silver Hoof, the magical goat. Legend had it that Silver Hoof was a very special goat. Where most goats have two horns, Silver Hoof has antlers with five tines. On his right forefoot he had a silver hoof. When he stamped his foot, a gem would be left there. If he stamped it twice there would be two, but if he pawed the ground there would be a whole pile of gems.

Kokovanya told Daryonka that he had been trying for years to find Silver Hoof and that when Autumn came he would be going into the woods to find him. Daryonka begged the old man to let her go with him, since she would be so lonely in the cottage and because she truly wanted to see Silver Hoof also.

So the old man, the young girl, and the cat headed deep into the woods. By now the cat was a very healthy and hearty cat and could offer them protection. They stayed in a cabin that the old man had there. The hunter hunted many goats, but he never found Silver Hoof. Towards the end of winter, he told Daryonka that he had so many goat skins and meat that he would have to go into town to get a horse to help bring it all home. It would take him several days.

On the 2nd day that Daryonka was by herself in the cabin, she heard a pitter patter outside. It was Silver Hoof! She opened the door and called out to him, but he ran away. On the 3rd day the cat went out to play but did not return. Daryonka was worried so she went outside to find him. There he was in the glade with Silver Hoof. Both were nodding their heads as if they were talking to each other. Then they began to run about in the snow. The goat would run and stamp all around the cabin. Then he jumped upon the roof and stamped some more. Precious stones flashed out like sparks -- red, green, light blue, dark blue, and many other colors.

It was then that Kokovanya returned, but he did not recognize his hut. It was covered in gems and sparkled in the moonlight. Suddenly, Silver Hoof and the cat just disappeared from the roof. They were gone. The old man gathered some of the stones in his hat and then he and Daryonka went in to sleep. They had such wonderful dreams. When they awoke they ran outside to look at the wonder, but all the gems were gone. All they had left were the ones the old man had put in his hat. But that was enough to let them live happily ever after. No one ever saw Silver Hoof or the cat again, but sometimes people still find stones in the glade where the goat played that night.