The Importance Of Making Friends 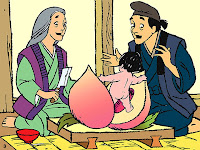 Once upon a time a woman went to a river to wash clothes. Just then, she saw a peach running with the current in the water. She took the peach home, where she and her husband cut it in half. A boy jumped out of the fruit. They named him Momotaro (the peach boy), and adopted the child. He grew up to be big and strong. One day, demons invaded the village. Everybody was very troubled. Momotaro asked his mother to make his favorite dish, kibidango. "I will go to Onigashima to fight the demons on their own territory". He took the kibidango and left. On his way he met a dog, a monkey and a pheasant. These animals were very hungry, and so Momotaro shared his kibidango with them. Gratefully the dog, the monkey and the pheasant decided tho accompany Momotaro on his dangerous mission. In Onigashima the furious demons attacked them. Momotaro would have been lost alone, but the monkey distracted the demons, the dog bit them and the pheasant pecked them while the Peach Boy fought with his sword. The demons were defeated, and Momotaro and his friends returned to the village victorious.
Japanese Fairytale
Posted by Unknown at 5:21 AM