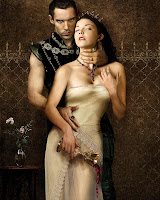 Why are we so obsessed with understanding every detail of Anne Boleyn’s rise and fall? It is because her character has archetypal force. The story is of its time and place, but also universal. She is the young fertile beauty who displaces the menopausal wife. She is the mistress whose calculating methods beguile the married man; but in time he sees through her tricks and turns against her. It is the human drama that engages us. Her trial is only patchily documented, but you can make an argument that, in judicial terms, Anne was murdered. In human terms, we see that she has been paid out. Natural justice came for Anne not in the shape of the headsman, but in the shape of Jane Seymour, the sly unnoticed rival who replaced her, within days, as Henry VIII’s third wife.
Posted by Unknown at 5:04 AM