The Devil In New York 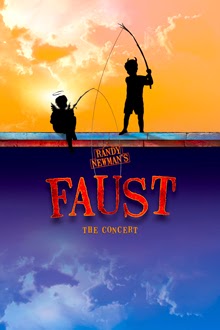 Without doubt Randy Newman is one of the best and most prolific American songwriters and a very fine film composer. I always thought he should write a musical. Five years ago I met with him in Beverly Hills to discuss a project. He seemed interested, but to my regret turned the offer down after some consideration. Too bad. We could have created something great together. Then again, he does not need me at all. In 1995 he released Faust, a concept album meant to become a stage musical. Randy's contemporary remake of the tale of Faust's deal with the devil hit the stage in Los Angeles and Chicago in 1996. Unfortunately the production directed by Michael Greif received only mixed reviews, and therefore never made it to Broadway. Thank God (or His counterpart) coming Tuesday, July 1st, New York audiences will get a chance to see a concert performance of Randy Newman's Faust at a one-night-only Encores! Off-Center production (City Center Mainstage). Randy himself will act as the devil. Other cast members are Michael Cerveris and Laura Osnes.