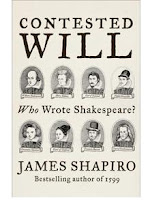 While in London, I came across James Shapiro's book Contested Will, Who Wrote Shakespeare. I follow the discussion (or should I rather call it the fight) about the authorship of Shakespeare's works for many years now and I read a dozen books pro and contra. The title of Shapiro's book is misleading. It does not ask who wrote Shakespeare (Shapiro does not doubt that it was Shakespeare himself), it tries to find out why the question was raised in the first place. Like James Shapiro’s previous book, 1599: a Year in the Life of William Shakespeare, a high-definition portrait of the playwright at the moment he wrote Hamlet, his description of the almost 300 year old controversy is a pleasure to read. That Columbia University professor really knows how to write non-fiction. I fully agree with Jeremy Noel-Tod who summed up his review for The Daily Telegraph like this: "Contested Will is a serious, interesting and original book about how Shakespeare’s genius can dominate the imagination. It is especially illuminating on the parallels between 19th-century religious and critical doubt. But its demystifying approach only explains part of the “why”: the minds of other people."
Posted by Unknown at 6:00 AM