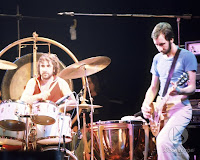 Arguably the most famous line The Who's Pete Townshend ever wrote was "Hope I die before I get old" on the angry young anthem of 1965, "My Generation". The world seems to have forgotten just how great The Who once were. They have long had to settle for third place in the pantheon of Sixties rock giants behind The Beatles and the Rolling Stones. Many, though, would argue that they were the greatest live band of all time, ahead not only of The Beatles and the Stones, but also of Led Zeppelin, the Jimi Hendrix Experience, Nirvana and all the other legends. When Townshend and singer Roger Daltrey – the other surviving original member of the group after the deaths of drummer Keith Moon and bass guitarist John Entwistle – played the post-9/11 Concert for New York City, their passionate performance had traumatised firemen on their feet with tears in their eyes.